The citadel is one of FunFrock's most important prisons, which gave its name to the island where is located: Citadel Island. Part of the building's interior is very similar to the one of FunFrock's Secret Fortress.

Twinsen's first adventure begins here. After seeing strange dreams (later revealed to be messages from Sendell), he is arrested by FunFrock, being the Heir who will destroy him. In his cell, he wakes from another such dream and is approached by a nurse on a hovering elevator, who tells him to be quiet. Twinsen takes the opportunity and kills the nurse to get out of his cell, which leads him to fight a couple more of nurses and doctors. He can enter a room where he can retrieve the ID card and the holomap that were taken from him when he got imprisoned.

To escape the facility, Twinsen has to wear a nurse outfit found in one of the rooms, otherwise, the nurses next to the exit will sound the alarm, and a supergro will appear from one of the telepods.

Once outside the citadel, Soldiers suspect Twinsen's outfit and attack him. He can't get through the gate, which only opens for authorised people or vehicles, so to successfully escape the citadel, Twinsen has to hide in the trash in a discreet behaviour, and board the garbage truck.

In LBA2, only the ruins of the citadel remain. 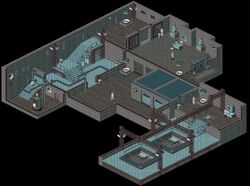 The interior of the citadel

The ferry and the citadel on the title background of LBA 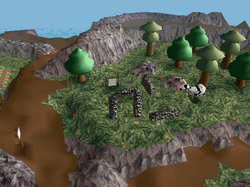 The ruins of the old citadel in LBA2
Add a photo to this gallery
Retrieved from "https://lba.fandom.com/wiki/Citadel?oldid=8181"
Community content is available under CC-BY-SA unless otherwise noted.